Over the years, Microsoft Active Directory (AD) has become the core of almost all organizations’ network infrastructures, acting as the central system for identity and access management. The current IT landscape is constantly evolving and has dramatically changed within the last decade. With Hybrid and cloud-based solutions continuing to be a driving force of IT environments, it’s becoming increasingly important for IT Decision Makers and Implementors to have the proper tools in place to help them keep up with the pace of change while preparing for the future.
The introduction of Microsoft Azure Active Directory (Azure AD or AzAD) changed the face of Active Directory Management greatly. Existing Active Directory management third-party vendors instantly became outdated because of the dissimilarities in how the two directories were designed. To be clear, on-premises Active Directory is not the same as Azure Active Directory. Some third-party vendors saw Azure AD as a new opportunity and focused their efforts on building new cloud-only products, not understanding that hybrid environments, using both on-premises AD and Azure AD, were going to become the new standard for the foreseeable future. Abandoning on-premises management meant that legacy Active Directory management tools were left with gaps when it comes to managing hybrid environments. Although some have tried to piece together something and claim “hybrid” in their marketing speak, legacy AD tools simply do not provide true hybrid management. 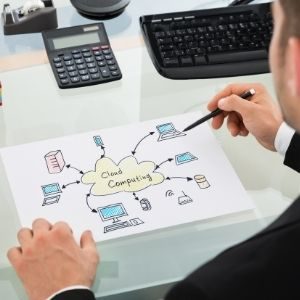 To truly understand hybrid Active Directory, it’s necessary to quickly review how Active Directory has progressed over the years and the different types. The term Active Directory can be confusing, as over time it has been used to describe relatively similar concepts but in different environments. The landscape of the Microsoft environment has also greatly developed, especially in the past 10 years.

Microsoft Active Directory (AD) has long been the heart of many enterprises, becoming a crucial component in IT infrastructures, managing access (authentication and authorization) for users, groups and computers within their organization. The Windows Server that holds a copy of the AD database is referred to as a Domain Controller, although technically the Domain Controller may be one of many Windows Servers on the network that uses AD to centrally manage access for users, computers, and servers. Think of Active Directory as a database that contains all the necessary information to verify identity (AD Authentication), through network logins called single sign-on (SSO), and to grant, or not grant, access (AD Authorization) to the appropriate software or files on the server. To distinguish between AD and AzAD, most people use the term on-premises AD to refer to the legacy AD and Azure AD to indicate the newer cloud directory.

For decades, on-premises AD worked as described above, and according to Microsoft it was used by 95% of business organizations around the world. In 2010, a paradigm shift occurred when Microsoft released its’ SaaS Cloud Platform, Microsoft Azure. This cloud-based system featured Microsoft Azure Active Directory (Azure AD or AzAD) to fill the function of identity and access management. What the industry quickly realized was Azure AD wasn’t simply a cloud version of its on-premises predecessor, it was new. Although Azure Active Directory performs some of the same functions, it has some quite substantial differences in how it operates, making it difficult for both customers and vendors to efficiently transition from on-prem to cloud.

Many companies have identified the need to move to Azure AD, as a traditional on-premises authentication

infrastructure doesn’t support a modern, cloud-based environment that is becoming the standard. While the benefits to Azure Active Directory have been well documented and it’s great for managing cloud applications, the problem is that Azure AD doesn’t completely replace AD when it comes to traditional on-premises infrastructures and applications, especially in large companies who have used AD for quite some time as their hierarchal source of data. There are several barriers to entry and when comparing legacy Active Directory architecture to Azure AzAD, it differs in a few critical ways: Azure AD doesn’t integrate with many on-premises applications and Azure AD has a flat structure with no Organizational Units (OUs) containers, which were the main way objects were organized in the legacy AD hierarchical structure.

What is Active Directory Management?

In order to deploy and operate Active Directory properly, organizations often implement Active Directory Management systems, these platforms are different from identity and access management (IAM) platforms in that they only target Active Directory rather than other connected systems. Although Microsoft Active Directory is one of the most powerful tools a network administrator can deploy, it can often be error-prone and time-consuming to maintain. Despite being incredibly powerful and forming a crucial part of an organization’s network infrastructure, native administration and management tools lacks automation, useful delegation, user-friendly interfaces, reporting and auditing features, security measures, and requires deep knowledge of complex command-line scripting language like Powershell, to extend operates beyond what is provided.

Full Identity Management systems are often considered complex, expensive, and seen to have a great amount of risk associated with them mostly from seeing failed implementations. Because of this, these systems are out of reach for most organizations. Experts in this field began forming companies specializing in Active Directory management, developing software and systems to better manage an Active Directory-centric IAM model.

These third-party Active Directory Management tools provided convenient solutions to help organizations more efficiently operate their AD. From delivering methods to automate and streamline their Active Directory, without IT administrators having to navigate the complex native tools or having to devote internal resources to maintaining the scripts necessary to allow Active Directory to function properly. Over time, Active Directory Management vendors began adding additional features to their products, giving system architects more security and recovery functionalities, typically by requiring purchase of another product. You will also see some providers who specialize in only one of these areas, like backup products that don’t include a management tool.

Hybrid Active Directory is a term used to describe a modern approach to identity and access management, where an organization uses both their existing on-premises Active Directory and Azure Active Directory. Hybrid changes everything. While most organizations see cloud solutions as potentially being the standard in the future, the current reality is that only 17% of organizations have transitioned to cloud-only deployments, with more than 50% of businesses working in a hybrid Microsoft environment.

For more about the current status of management and protection in Microsoft environments, from other IT professionals, read our full study. 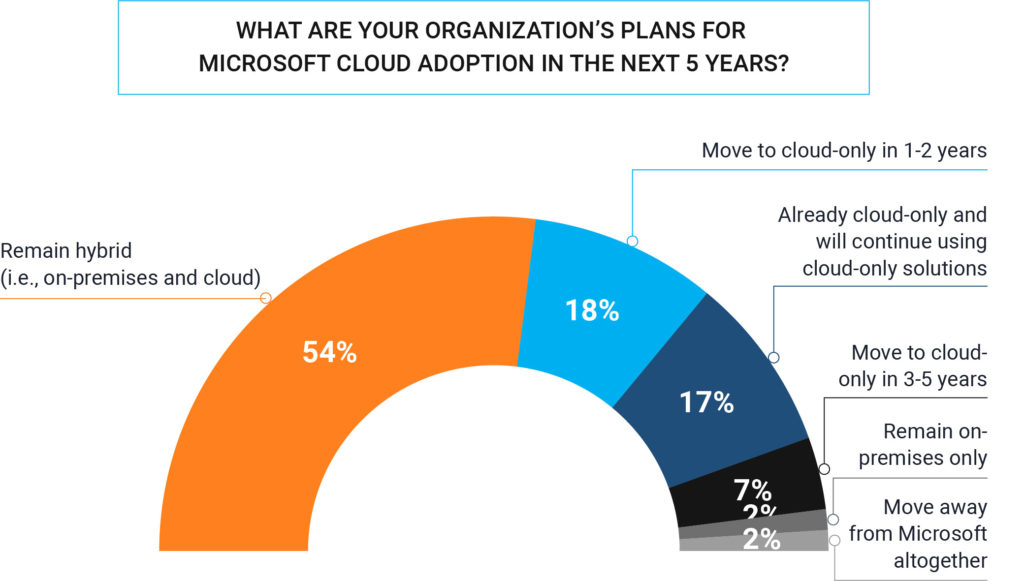 While there are many things Azure AD and Microsoft 365 can offer, there are several issues that require additional considerations, complex planning, and costly implementation in order for organizations to transition to cloud-only. With on-premises AD having been embeded deeply into the companies’ IT infrastructure for so many years,  it’s difficult to untangle and rebuild; especially when Azure AD does not have the same basic functionality of legacy AD. Also, many application vendors may take up to 10 years to become fully accessible from a cloud-only directory. Put simply, Hybrid Active Directory environments are the new standard for modern enterprises and will be for the foreseeable future.

The Race to Market “Hybrid”

As enterprises transition a portion of their on-premises Active Directory to cloud-based products like Microsoft 365 and Azure Active Directory (Azure AD), the need for a hybrid solution to bridge the multiple environments has become increasingly important. Managing users, security policies, change monitoring and audits across a mix of domains and tenants, adhering to increasingly stringent compliance and legal regulations (like SOX, HIPPA, and PSI), both in cloud and on-premises, can become a massive undertaking for IT administrators, especially with limited budgets.

As we discussed previously, many third-party experts became vendors of Active Directory Management tools. When Azure AD became a reality, some of these providers decided to focus their attention on creating cloud-only tools to capture the anticipated cloud-only market, while others decided to keep their focus on their existing on-premises AD customer base only. As time went on, it became clear that the transition to cloud was going to be a journey, with hybrid being a large part of it, and some tools just aren’t fit to make the journey.

With more than half of the market operating in a hybrid environment, existing Active Directory Management tool providers, also known as legacy AD management, have tried to use several techniques to bolt-on components to their existing software in order to claim “hybrid” and to be able to market their products as hybrid capable. When Microsoft introduced Azure AD Connect, a tool released to help sync on-premises AD to Azure AD, more legacy AD tool vendors simply added “hybrid” to their sales pitch acting like it was a feature of their product, simply because AAD Connect could push to cloud many of the changes their legacy AD product made. This does not however allow for a mix of management, for example resetting on-premises AD user passwords and managing cloud only security groups or Teams Memberships with one delegation model and in one user interface.

You’ll find that many of the traditional on-premises Active Directory Management solutions vendors have separate on-premises-only and cloud-only products. Unfortunately, this can lead to issues as organizations have to purchase and manage multiple solutions and sometimes can include Powershell scripting in order to fulfill the “hybrid” component. Deployment of these can often be complicated and time-consuming to configure.

Although these legacy AD tools provided many great solutions for on-premises Active Directory, in today’s ever-evolving, modern environments these tools aren’t ideal. In most scenarios, they add additional costs and increase the burden placed on IT departments in order to continue use multiple legacy tools. Since, “hybrid” claims have become such a popular marketing method, how do you know if a provider is actually hybrid and can progress with you on your journey to the cloud? In the next part of this blog series, we will be discussing ways to identify if you’ve outgrown your current Active Directory Management provider and it may be time to consider one built purposely for hybrid environments.

At its core, user provisioning is a process that makes sure that user accounts are created, given the most appropriate level of permissions and managed

Microsoft’s powerful array of cloud offerings—Microsoft Azure, Dynamics, and Office 365—offer paths to business growth without the huge capital investment. Most organizations on the cusp of

Microsoft announced any customer using a subscription of a commercial online service can connect all their cloud applications to Azure AD for single sign-on (SSO), and protect this